Kitchener, ON – Aug 27, 2013 – The Labour Day weekend drag racing action will be hot at Toronto Motorsports Park – Cayuga Dragway from August 31 to September 1 as they host the 2nd Annual Canadian Funny Car Championships.

Larry Dobbs of Welland, ON, who leads the pack with his 2002 Pontiac Firebird, sponsored by Sportz Truck Tents by Napier Enterprises has lots to defend at this event. Dobbs is the 2012 champion and he holds the top spot on the 2013 numbers board. Larry has two NDRA Alcohol Funny Car Series victories under his belt so far this year.

Dylan Hache out of London, ON won this race last year in his For Wheels Auto Care ‘02 Pontiac Firebird. He sits at #3 on the points tally for 2013. There’s no doubt that he wants to duplicate his performance from the closing race of 2012 and tip the scale for Dobbs.

Firebird to contend with. The St. Thomas, ON racer took the 2nd race of 2013 from Dobbs and is real tight on Larry’s heels at #2 on the points list. Ron is determined to tie up the wins and steal the championship from the Kardiac Kids Racing pilot.

Not limited to the three top spot guys, there are the rest of the NDRA Alcohol Funny Car Series drivers, including three-time IHRA world champ, Rob Atchison who went to the finals against Dobbs at the last race in Grand Bend, who are perfectly capable of taking the stripe.

As well, Paul Noakes of London, ON has signed onto the roster with his 2009 Meritor Motorsports Euclid Harman HVS Ford Mustang.

All combined, the NDRA Alcohol Funny Car field is loaded with seasoned talent and amazing cars.  It’s anyone’s guess who will come out on top at the end of the contest and as we all know … Anything can happen in drag racing especially with those finicky alcohol-guzzling floppers!

Over in the NDRA Pro Doorslammer stable, there is another three-way battle that may just be more heated because this is the inaugural championship of the newly incorporated series!

At the top of the points leader board, Dave Earhart has a steadfast focus on taking the trophy back to his Strathroy, ON shop. Earhart and his Earhart Heating & Cooling INC. / Performance Unlimited 2002 Chevrolet Camaro picked up the win in the 3rd NDRA Pro Doorslammer Series outing at the 4th Annual Canadian Nitro Nationals in July. If he grabs a second win this time around and all goes well in qualifying, Dave could clinch the championship.

Trevor Deeks of London, ON is so close to Earhart in the numbers and winners circle that this competition will be a nail-biter. Deeks is only three

points behind Dave and he victoriously drove his Comprehensive Mechanical sponsored ’05 Grand Am down the return road at the series opening at Grand Bend Motorplex’s “Spring Blowout” presented by RPM Magazine and Lucas Oil back in May. Undoubtedly, Deeks and the entire CMS Racing crew will be tweaking and tuning with anticipation this weekend!

Bayfield, Ontario’s Wayne Nielsen captured the second NDRA Pro Doorslammer Series race at Grand Bend Motorplex in June with his Stoney Brook Automotive backed Lumina and is a respectable third in the series point standings. Nielsen and his Nielsen Racing team are certainly capable to cross the

beam for another victory and really jolt the NDRA Pro Doorslammer Series 2013 stats.

A betting man may set his sights on the top three, but the rest of the NDRA Pro Doorslammers cannot be denied their due attention. Every driver and crewmember has the ability and absolutely worthy equipment to take their turn in the winners’ circle. You just never know for sure when you put a dynamic field of competitors together like the NDRA has.

With both the NDRA Alcohol Funny Car Series and the NDRA Pro Doorslammers Series winding up and the teams battling for all the marbles in some really hot competition, fans are in for some spectacular drag racing at the 2nd Annual Canadian Funny Car Championships at Toronto Motorsports Park – Cayuga Dragway this weekend!

The 2nd Annual Canadian Funny Car Championships at Toronto Motorsports Park – Cayuga Dragway promises to be a thrilling, action packed weekend for everyone who passes through the gates from August 31 to September 1.

For more information about the event, visit www.torontomotorsportspark.com.

For more information about the NDRA and the 2013 schedule, visit the website: www.ndra. 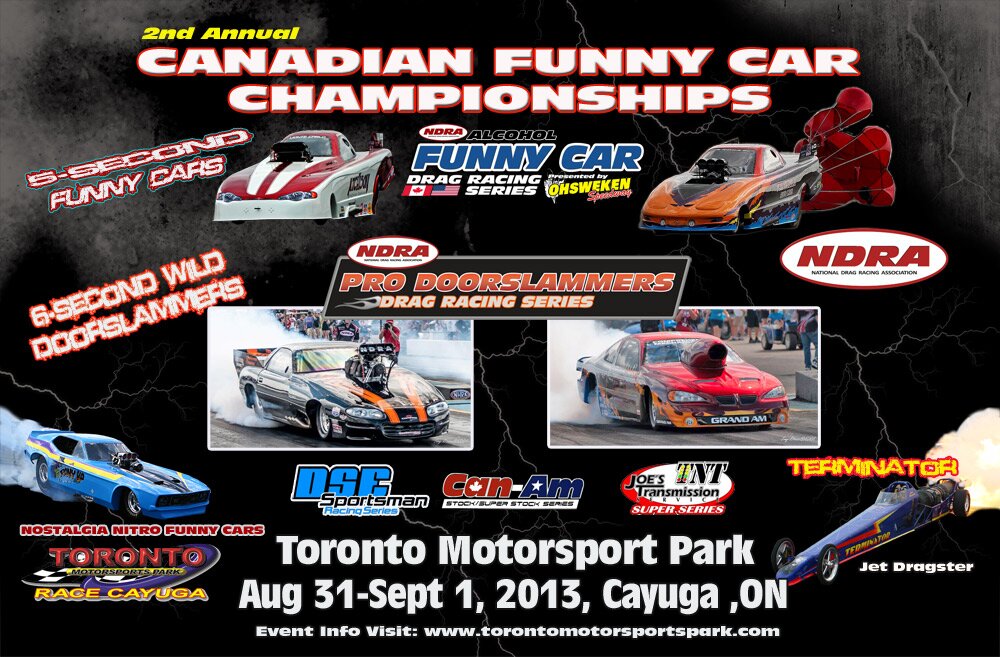